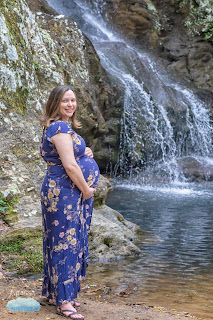 I was so excited to meet up with Erica and Jon at High Shoal Falls in Dallas, GA for a stunning – and terribly sweet – maternity session. At the time, Erica was mere 4 weeks and 1 day away from giving birth, so you can only imagine how she was feeling while we were roaming around finding the best spots to shoot! She was a trooper, though, let me tell you. Her skin looked amazing, her hair was perfection, and her Dress was on point. 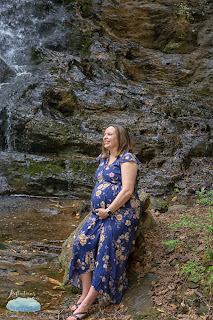 This couple has a special relationship and a special story to tell their little one when he/she gets older. They chose a picture that says Adventure awaits as one of their props. I don’t think they realized that when they met along that trail, where the trail would actually lead them. They met online and met in person along the Appalachian Trail starting in Pennsylvania. They hiked the remainder of the 2200 trail together north from Pennsylvania all the way to New Hampshire. Erica said, “Through all the hard times the trail dealt us, we only grew stronger together.” And now, here they are 8 months later and starting a family of their own. 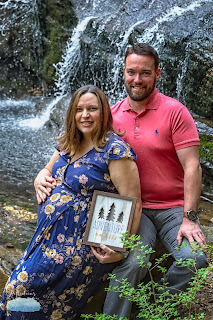 Not to mention, Jon was a total loving and supportive rock star the entire time. There was a moment when he was helping her climb over the creek on the rocks and a crossed the muddy bank of the stream and I nearly fainted from the tenderness of it all! She also mentioned how much of a rock star John has been at home. “He does everything around the house all the cleaning, some of the cooking, carries everything in for me and put together everything for the baby. This baby is pretty lucky to have such a loving and caring father.” She is a lucky girl to have such a loving and caring boyfriend! 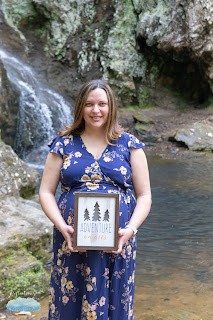 Since they’re almost at the end of the pregnancy, I asked them about how their journey has been thus far. Mom said, “We have gone on a few easier hikes while I’ve been beyond 20 weeks pregnant but early on we were still doing strenuous hikes up in New Hampshire and Vermont. Aww!
One of the things Erica says she is looking forward to about giving birth is finding out the gender of their little one. I’m sure this will help with her wanting an all-natural birth. “I look forward to being able to birth my baby naturally but not looking forward to the pain that will bring. I know my strength though and believe in myself enough plus with the support of Jon I know I can do this.”
They’re going to be an amazing Mom and Dad duo, and their little bundle of joy is so lucky to be brought into the world with them. Thanks again and congrats, you two!
Advice from the client:
When asked; What’s one piece of advice you would give to other expecting mothers for the session? Erica said “Just trust in her abilities to find the right poses and lighting.”
She also said that her experience during the session was “Very easy and comfortable…she made it simple and not awkward at all even when other people showed up.”

Popular posts from this blog 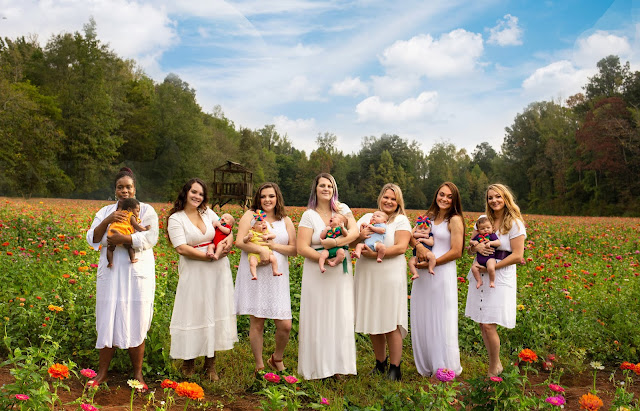 An angel in the book of life wrote down my baby’s birth. Then whispered as she closed the book, “too beautiful for earth”. – Unknown


My goal of this documentary is to help spread awareness of the 1 in 4 women/families who suffer a infant loss. No matter what part of pregnancy whether early on, late term or at the very end of the pregnancy a loss is still a loss and it is in no way anyone's fault. This is a continuation of the first part (post link back to part 1) and includes the birth stories of the 7 women I worked with back in May as well as more about my story.

MY STORY CONT:
September 10, 2016 was supposed to be one of the greatest days of my life. I had dropped off my younger 2 girls at a friend’s house and headed out to my doctor’s appointment for my 20 week ultrasound. I had a gender reveal photoshoot planned that afternoon as this pregnancy would be the tiebreaker in our family. We were even at 2 boys and 2 girls and hadn’t even expected to get pregnant again. I had been a…
Read more 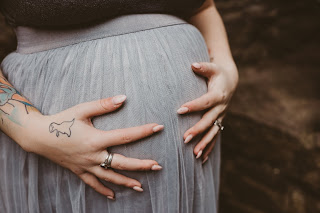 Monica Taylor is a mom from Dromore South, Dromahane Co Cork Ireland. I met her through one of my many support groups for women/families who have felt the loss of a pregnancy/infant/child. She was willing to share her story in my blog series from a crossed the ocean. A lot of women suffer from miscarriage. Some might not even know they are having a miscarriage; others have what is called “missed miscarriage” where it is undiagnosed until later in the pregnancy. Some women have miscarriages and then have a baby while others have consecutive miscarriages and try hard for their rainbow. While some of these moms with consecutive miscarriages may never know why they are happening, they long for the end of the tunnel when they finally get to hold that little one, their rainbow through the storm. Monica had 4 consecutive miscarriages after 3 healthy pregnancies with no explanation, one of which was twins so in total she lost 5 little angels. Her and her husband met at a soccer practice and b…
Read more

"The largest of blessings are those that are small." - Unknown 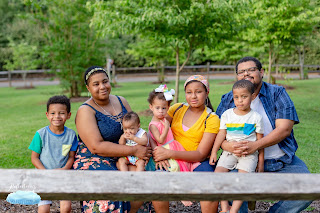 The following is another story of pregnancy/infant loss by one of my clients. Every one of her children except her first (her sunshine baby) is a rainbow baby due to miscarriage but this story focuses on the loss that wasn’t supposed to happen. The one that should have lived if the proper steps had been taken by her doctors. This is her story:
“My husband and I were super excited to find out that we’d be welcoming our 2nd child the following summer. But there was some complications from the beginning. I had a bad fall. So at about 8 weeks, I started to bleed a lot. Like a period. I’d see my OBGYN and he’d tell me that I had a Chorionic hematoma, and that it wasn’t much to worry about. I went on to bleed the rest of my pregnancy. Fast forward to week 17. I was standing up cooking dinner when I felt a huge GUSH of fluid. Thinking it was just urine, I go and change. But it continues to happen. Concerned, I go to the ER. They tell me that it’s just urine, and just send me home. 2 days pass…
Read more